Hampi is a village which is located in the northern part of Karnataka. This place is seen as one of the famous religious centers and also home to the various monuments that belonged to ancient age. Hampi was also listed in a UNESCO world heritage site. This place is also associated with one incidence of Ramayana, when Ravana the king of Sri Lanka abduct the Devi Sita (Lord Rama’s Wife) then Lord Rama and his brother reached this place on her searching and they meet Sugriv and sought help from him to make an army in order to rescue his wife. 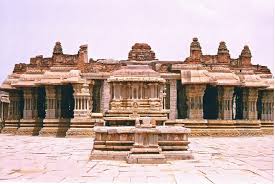 The most important attraction of this place is Vithal Temple which is located in the north eastern part of Hampi. This temple is known for its surprising architecture and artistry, which also serves as a center of religion for that area and most famous structure of Hampi. This temple has fascinating structures of stones such as musical pillars and stone chariot.

The Musical Pillars Of Vithal Temple. The musical pillars are the center of attraction for tourists and visitors. There are 56 pillars in the large Mantapa (inner hall of the temple) which consist of main pillars and several minor pillars. Each main pillar are designed as a musical instrument and surrounded by 7 minor pillars. When someone gently tapped these pillars it produces the 7 musical notes therefore these pillars are also known as SAREGAMA pillars.

It was a great mystery that how the stone pillars emits seven notes of music and therefore these pillars fascinated many people since century ago. There was a interesting story associated with it that one British ruler want to discover the secret behind these pillars and he ordered to cut two pillars of the Vithal Temple to find weather there is anything inside it which emits the musical notes but he found nothing inside the pillar. The two pillars which were cut by the British ruler were still present inside the temple and can be seen by tourists whoever want to see. There was a carved stone chariot (रथ) inside the complex of Vithal Temple and was serves as a marvelous architecture of the Vijaynagara kingdom. There were three famous stone chariot in India and it is one of them. It was actually a shrine that has been designed as an ornamental chariot. The image of chariot enshrined into a temple dedicated to Garuda. According to Hindu methodology Garuda is the carrier of Lord Vishnu.