Why Do We Celebrate Navratri.

Navratri is one of the most auspicious Hindu festivals. The term Navratri is the Sanskrit word in which ‘Nav’ means nine and ‘Ratri’ means Night. This festival of nine nights and ten days is celebrated in glory of Hindu goddess Maa Durga and each of these nine days of Navratri festival dedicated to nine divine form of Maa Durga. According to Hindu calendar there are four Navratri held in a year and among these two Navratri are known as Gupta Navratri. In these four Navratri, Sharad Navratri is the most important one which is always held in between the month of September-October every year. According to Hindu Calendar 2017 the Sharad Navratri start on September 21 and will have been celebrated till the date of September 29. Every Hindu celebrates this festival with so much energy and zest. Many devotees keep fasting to please Hindu Goddess Maa Durga. People organize Dandiya and Garba in different parts of the country. 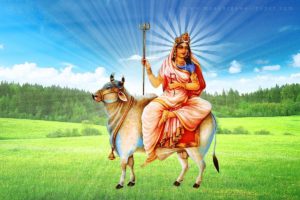 According to Hindu mythologies Shailputri is one of the nine forms of Maa Durga and is worshipped on first day of navratri festival. As she is the daughter of the king of mountain the Himalaya, therefore she is named as Shailputri. Maa Shailputri always has a trishul and lotus flower in her right and left hand respectively. It is believed that her favorite flower is Jasmine (चमेली). Devi Shailpurti steer the bull and therefore also named as Vrishrudha.

According to the astrology point of view Maa Shailputri ruled the planet Moon, the provider of wealth and prosperity. Any malefic effect of Moon can be eliminated by worshipping Maa Shailputri, the one of the divine form of Adi Shakti. 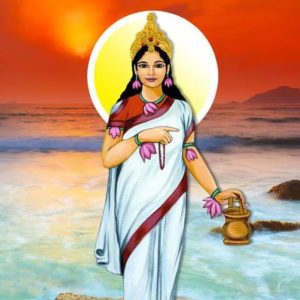 Maa Brahmacharini is the second divine form of Adi Shakti and Hindu worships her on the second day of the navratri festival. She performed a hard atonement (कठिन तपस्या) to get God Shiva as her husband in her life. Because of performing a hard Tapa and penance she named to Maa Brahmacharini. During the period of her hard penance she spent 1000 years by eating only a fruits and flowers so that she can get a lord Shiva as her husband. There is a myth that after living on fruits and flower for 1000 year she spent another 3000 years only on the leaves of the Bilva and after that she left that also and worshipped lord Shiva without taking any food and water. Maa Brahmacharini always walking on bare feet and carries a rudraksha mala and kamandal in her right and left hand respectively.

According to astrology point of view it is believed that the planet Mars is ruled by Maa Brahmacharini and the person worshipping her can easily be safe from malefic effect of the Mars. 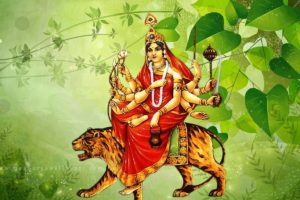 People worship this divine form of Adi Shakti on third day of navratri festival. It’s a myth that when mother goddess Parvati get married to lord Shiva, she garnish her forehead with the half moon which looks like a half bell and therefore she named as Chandraghanta. Maa Chandraghanta gives a peace and success to her devotees. The tiger is the ride of Maa Chandraghanta. She has ten hands in which she carries a Trishul, Sword, Gada and Kamandal in her four left hands and keep her fifth left hand with Varada mudra. She carries a Bow, Arrow, Lotus flower, Japa Mala in her four right hands and keeps her fifth right hand in Abhaya mudra. It is believed that the devotees who worship her are always happy and Maa Chandraghanta evicts all type of bad spirit far from her devotees.

According to the astrology point of view the Planes Venus is ruled by Maa Chandraghanta and person can easily reduce the malefic effect of Venus by worshipping this form of Adi Shakti. 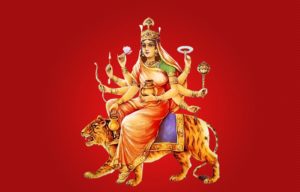 Hindu people worship this form of Adi Shakti on the fourth day of the navratri festival. It is believed that Adi Shakti creates the universe (Brahmand) with her little bit of smile and therefore named as Kushmanda. She lives at the center of the sun and control the whole universe. She is the only who gives the light and energy to all the 10 direction of the universe. Her shine and gleam of the body is as luminous as sun and she is only who is capable to live in the core of the sun. Maa Kushmanda has eight hands and therefore also known as Astabhuja. She always carries a Kamandal, Bow, Arrow, Lotus flower, Amrit, Chakra, Gada and Lotus Rosary in her eight hands. Devi Kushmanda steer on lion and the devotees who worship this form of Adi Shakti with a great devotion can get a long life, happiness, success and wealth as a boon from Maa Kushmanda.

According to astrology point of view she ruled the planet Sun as she is living in its core and also gives energy and direction to it. So, one can easily reduce the malefic effect of the sun from one’s life by worship Maa Kushmanda. 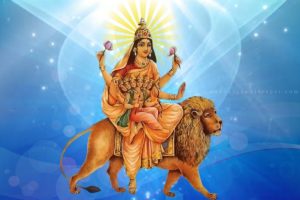 Skandamata is one of the forms of Adi Shakti that is worship by the devotee on the fifth day of navratri festival. As mother goddess Parvati is the mother of lord Kartikeya who’s other name is also Skanda and therefore she is also named as Skandamata. Lion is the mount of Skandamata. She has four hands in which she carries lotus flower in her two upper hands, a baby kartikeya in her lower right hand and the lower left hand of Skandamata is in Abhay Mudra. Skandamata remove all the sins of her devotees and even give him/her a moksha after death, if the devotees worship her with great devotion.

According to astrology point of view the devotee who worships Skandamata can be safe from malefic effect of planet Buddha as it is governed by her. 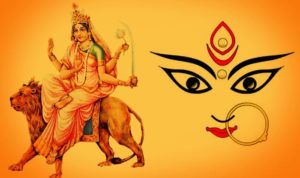 This divine form of Maa Durga is worship by the Hindu devotee on the sixth day of the navratri festival. According to Hindu mythologies the sage katyayana perform a hard penance to get mother goddess born to him in the form of daughter to save all the sages and devtas from the demons. Seeing his severe penance and great devotion Adi Shakti accepted his request to born to him as a daughter. Maa Durga took birth in a katyayani ashram on dakshin Krishna chaturdashi to save all sages and devtas from demons and thus named as Katyayani. She has four hands in which she carries a lotus flower and swords in her two left hands and always keep her both right hands in Abhaya and Varada mudra. The devotee who worships her can easily get the boon of all Dharma, Artha, Karma and Moksha.

According o astrology point of view the planet Jupiter is governed by the goddess Katyayani. 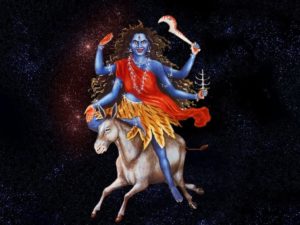 Maa Kaalratri is the ninth manifestation of Maa Durga and is worshiped by Hindu devotee on the seventh day of the navratri festival. It is believed that when devtas are frustrated by demons Raktabija then they go to lord Shiva to save them from demon. On behalf of their request lord Shiva tell the mother goddess to solve their problem and then mother goddess Parvati changed to the form of Kaalratri to kill the demon Raktabija. This is one of the most violent forms of Maa Durga. Maa Kaalratri mounts on a donkey. She has dark complexion with four hands in which she carries swords and iron hooks on her both left hands and keeps her both the right hands in Abhaya and Varada mudra. The devotee who worships her is always free form all type of fear and also get a auspicious and Shubh power from her therefore she is also known as Shubhankari.

According to astrology point of view the planet Saturn is ruled by Maa Kaalratri. So, who want to be safe from malefic effect of Saturn can worship Maa Kaalratri. 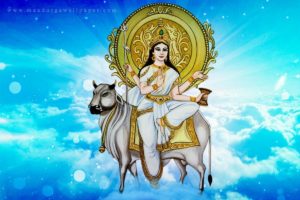 According to Hindu mythologies, the Mahagauri is one of the divine forms of Maa Durga worship on the eighth day of the navratri festival. She is very beautiful with white complexion and therefore named as Mahagauri. ‘Maha” means Extreme and “Gauri” means Fair Color. She mounts a white bull. She has four hands in which she carries a Trishul in upper right hand and her lower right hand is in Abhaya mudra, carries a Damaru in one left hand and other left hand is in Varada mudra. She is also known as Shwetamberdhara because of always wearing white cloths. She gives the peace, success and victory to her devotees and also washed their all sins to clear the path of Moksha.

According to astrology point of view the Rahu is governed by the Maa Mahagauri. So, who worship her will always be safe from the malefic effects of the Rahu. 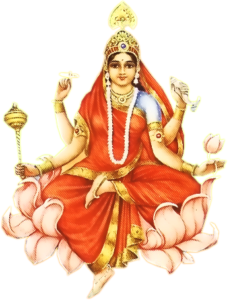 As per Hindu mythologies Siddhidatri is the ninth divine form of Maa Durga and devotees worship her on the ninth day of navratri festival. As she has all the eighth types of Siddhis ( Adima (अणिमा), Mahima (महिमा), Garima (गरिमा), Ladhima (लधिमा), Prapti (प्राप्ति), Prakamya (प्राकाम्य), Ishitva (ईशित्व) and Vishitva (विशित्व) and therefore named as Siddhidatri. Even it is believed that lord Shiva also got siddhis from Maa Siddhidatri and his one of the roop Ardhanareshwar is also granted by her. The devotees of Maa Siddhidatri not only include the Humans but also Deva, Yaksha, Gandharva and Asuras. She gives all the type of siddhis to her devotees so that h/she can achieve anything whatever h/she wants and for her devotees nothing is impossible to achieve in this universe. She mounts on the lion and sits on the lotus flower. She has four hands in which she carries a Chakra and Gada in both of her right hands and Shankh, lotus flower in both of her left hands.

According to astrology point of view Maa Siddhidatri governed the planet Ketu. So the one whoever wants to be safe from the malefic effects of Ketu should worship the Siddhidatri form of Maa Durga.

Thanks for giving your valuable time to read this article and if you think that it worth then please share it with your loved once.