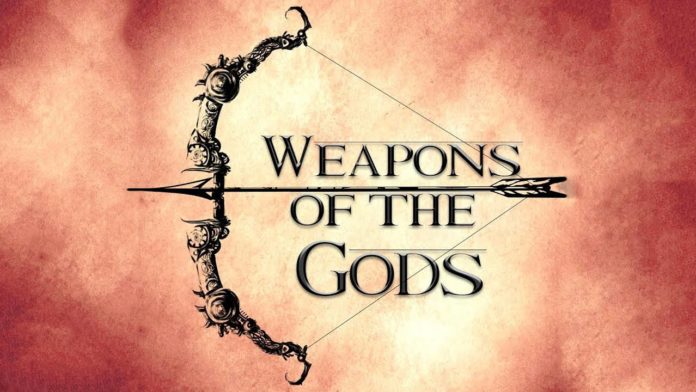 Undoubtedly, one of the greatest Sanskrit epics ever written is the Hindu epic Mahabharata. Moreover, it is an unparalleled depiction of grand warfare, perfectly blended with a religious/moral connotation.

According to historians, Mahabharataa is, in fact, folklore, colloquially known as Mahabharata Katha. In the Mahabharata, Krishna plays a central role, along with others like Arjun, Bhim, Yudhishthir and so many others. In fact, there are so many, that a list of ‘major’ names can itself be a separate article.

As anyone familiar with the epic might already know, the Mahabharata revolves around the Pandavas and the Kauravas. The Pandavas were the five sons of Pandu, namely, Yudhishthir, Bhim, Arjun, Nakul, Sahadev. The Kauravas were descendants of the legendary king Kuru. They were many in number, with the more famous ones being Duryodhana and Dushasana.

In the epic’s central war or the Mahabharata Yudh, many weapons have been used. Herein, I’m enlisting the 10 most powerful weapons used in the Mahabharata Katha, in increasing order of their capacity.

This lethal weapon, owned by the Indra – the King of Hindu Gods – which he loaned to Karna for a one-time-use. This was the only weapon which could kill the mighty Arjun and Karna preserved it for this purpose.

However, by the manoeuvrings of the mastermind of Mahabharata, Krishna, it was used instead on Ghatotkacha, the son of Bhim. In fact, Karna was one of the unknown Pandavas. Unaware of his true identity, he was fighting for the enemy and against his own brothers.

Made out of Sage Dadichi’s spine, this was Indra’s most effective weapon in all of Mahabharata Katha. This indestructible weapon was used in the Mahabharata Yudh to kill the demon Vritra.

Such was the glory of this weapon that Krishna qualified himself as the Vajra in the Gita. Moreover, the Vajra is often used to symbolize the indestructibility of a diamond and the indomitable force of the thunderbolt.

In terms of appearance, the weapon is like a club with a spherical, ribbed head. The end of the rib may be ball-shaped or sharp.

This weapon of Lord Narayan was able to split itself into a million missiles. One had to either disarm the weapon or surrender to it. The force and density of the shower increased steadily with the increase in resistance from the attacked. However, the Narayanastra was noble enough to stop attacking the moment its target offered complete surrender.

The weapon was only known to Krishna, Drona and Drona’s son. Knowing the trick, Krishna disarmed the weapon when it was used against Arjun and his army.

The Brahmastra was created by Lord Brahma. This rare weapon was used only once throughout the Mahabharata Yudh by Sage Vishwamitran. The weapon was somewhat similar to the present-day atom bombs. It was fully capable of destroying the whole world at one go.

Once, Karna wanted to use it on Arjun but was stopped from doing so by his mother and teacher.

It was hurled against one another by Ashwattama and Arjun. A cease-fire was ordered by Narada and Vyasa and Arjun retracted his weapon. Ashwattama could not, however, retract it and directed it towards Parikshit, who was saved by Krishna.

This indestructible weapon, capable of destroying any creation, was owned by Lord Shiva. In order to discharge this weapon, one could use their mind, words, eyes or a bow. Using Pashupatastra against mortals was forbidden in the Mahabharataa.

In fact, no one was allowed to use this weapon against any lesser enemy. Moreover, a lesser warrior was also not allowed to use it. Although Arjun acquired the weapon once, he did not use it in the war.

The Brahmadanda was the only weapon which could defend its user against the Brahmastra. This rod of Lord Brahma was indeed the most powerful defensive weapon to be used in the Mahabharataa. It was used by Sage Vashista to protect himself from the attack of Sage Vishwamitran.

The Sudarshana Chakra was the weapon of the Sustainer, Lord Vishnu. It is disk-like and its name literally means “disk of auspicious vision”. With its 108 serrated edges, this weapon is commonly portrayed in the rear-left hand of Lord Vishnu. Sometimes, the chakra is also seen as symbolizing the wheel of time, which Vishnu controls.

In the Mahabharata, Krishna used this weapon at Yudhishthira’s Rajasuya Yagna, to kill Sisupala.

In one of his fit of rage, the God of Destruction used the Trishul against his own son Ganesha, severing his original head. As we all know, it was later replaced by the head of an elephant.

By far, the most powerful weapon in the entirety of the Mahabharataa was Buddhi or the mind. Buddhi was also possessed by Lord Shiva or the God of Destruction. In one of his statements in the Bhagavad Gita, Krishna stressed the importance of the mind. According to him, if posited vertically, Buddhi was over the physical senses.

Placed higher than the mind was intelligence and the soul was the highest posited entity. By saying these words, Krishna urged Arjun to focus his mind on spiritual wisdom by letting go of material lust. In the Mahabharata Katha, as elsewhere in the corpus of Indian philosophy, lust is regarded as one’s worst enemy. Only a focused, strong mind has the capacity to suppress and dominate this lust. Consequently, the mind is the most powerful weapon to have been used in the Mahabharata Yudh.